I've been talking an awful lot about moving lately, and I have.

Well, kind of. I'm still in my same, old, kind of crappy apartment BUT my blog has moved.

If you're really attached to the old blog here, well, you can visit my old posts any time! But head this-a-way and stay up-to-date on my antics and all kinds of other stuff.

XO
Posted by Unknown at 7:47 pm No comments: Links to this post

Wow! What a great day out there, today. I'm glad that you decided to spend your afternoon soaking up some of the Haligonian beauty and enjoying the warm weather. We were really happy to get outside, too.

I'm sorry that you seemed to think I wasn't doing an adequate job of keeping F's face clean while we were enjoying our ice cream cones on the sidewalk. What you obviously don't know is that ice cream tastes infinitely better when you have it smeared all over your face. You also clearly missed the pile of chocolate ice cream-stained napkins from the thirty times I'd already wiped his face. It's hot. Ice cream melts. Perhaps you can see how that was an uphill battle.

I am not sorry that I asked you to please not touch my child. I don't know what planet you live on, but I live in a world where you don't lay a finger on another human being without asking their permission. I also live in a world where people have this crazy thing called "personal boundaries", and when you walked up to us at the table and reached across with a napkin to wipe my kid's face, you're lucky I didn't throw my ice cream cone at you. Of course, that would have been a waste of a perfectly good ice cream.

I know that you (probably?) meant well and that you (hopefully?) meant no harm, but get your shit together, lady. Would you like it if I stood up and fixed your hair? Probably not.

I hope you remembered your sunscreen and that the next mother of the kid whose face you try to wipe is as patient as I was. If not, you kind of deserve to get smacked.

Posted by Unknown at 3:28 pm No comments: Links to this post

I took an enormous leap yesterday when I sat in a beautiful conference room in Dartmouth that looked across Halifax Harbour and filled out about 30 forms to start my petition for divorce. It was a big step for me. Gargantuan, even.

It's a word I never wanted to use to describe my actions. I could never have anticipated that I'd be a divorced, single-mum by the time I was 26 but here we are. Congratulations, Universe: you got me good. It knocked the wind out of my sails for the day yesterday, and I'm like a wobbly-legged foal this morning but I'll get there. But I'll admit that I'm a little nervous about what the future holds.

During this journey, just as I always have I find myself returning to a quote I heard when I was in my early teens. It's a quote that describes my approach to life. It's the quote next to my photo in my yearbook. The quote I share with students who are worried about what will happen after graduation.

You can only see as far as your headlights, but you can make the whole trip that way. -- E.L. Doctorow

But just for fun, every now and again, I like to turn off my headlights and imagine what's out there in the dark.

XO
Posted by Unknown at 3:54 pm No comments: Links to this post

I'm not a huge fan of the parent-themed holidays, to be honest.  Mother's Day makes me feel almost as miserable as Father's Day and misery isn't exactly a fun state to find oneself in.

This will be the third Father's Day that F's father hasn't been around. He's missed seventy five per cent of Father's Days in his son's life. It's a thought that should make me furious, but it doesn't. It makes me really, really sad. F doesn't deserve that.

This will be the third Father's Day in F's little life that I've worried about my son not having a man to look up to. I worry that he doesn't have a man to walk with him through the ups and downs of life, and while I try my best I know I can't replace that male influence.

He once asked me to show him how to stand up to pee and that just ain't gonna happen.

The one where F asks when his Dad is coming home.

And for all the sadness I feel, I feel so much love and joy and appreciation that both F and I have my Dad. We have Uncle Allan and Uncle Buddy. There's Uncle Nelson and Uncle Johnny, Uncle Gordon and Uncle George. We have Uncle David and Uncle Edwin. We have my brother, Devin, and my friend Evan.

Although we lost F's Dad, we have many strong, wonderful men in our lives and I hope they all feel a little bit of our love tomorrow. XO

Posted by Unknown at 8:02 pm 2 comments: Links to this post

I lost my words for the past few weeks.

I'm not really sure what happened - perhaps I was just too tired, or maybe it was all the stress I've been feeling lately. Whatever the cause, I think it's finally gone. And that makes me really, really happy.

Know what else makes me really, really happy? This guy. 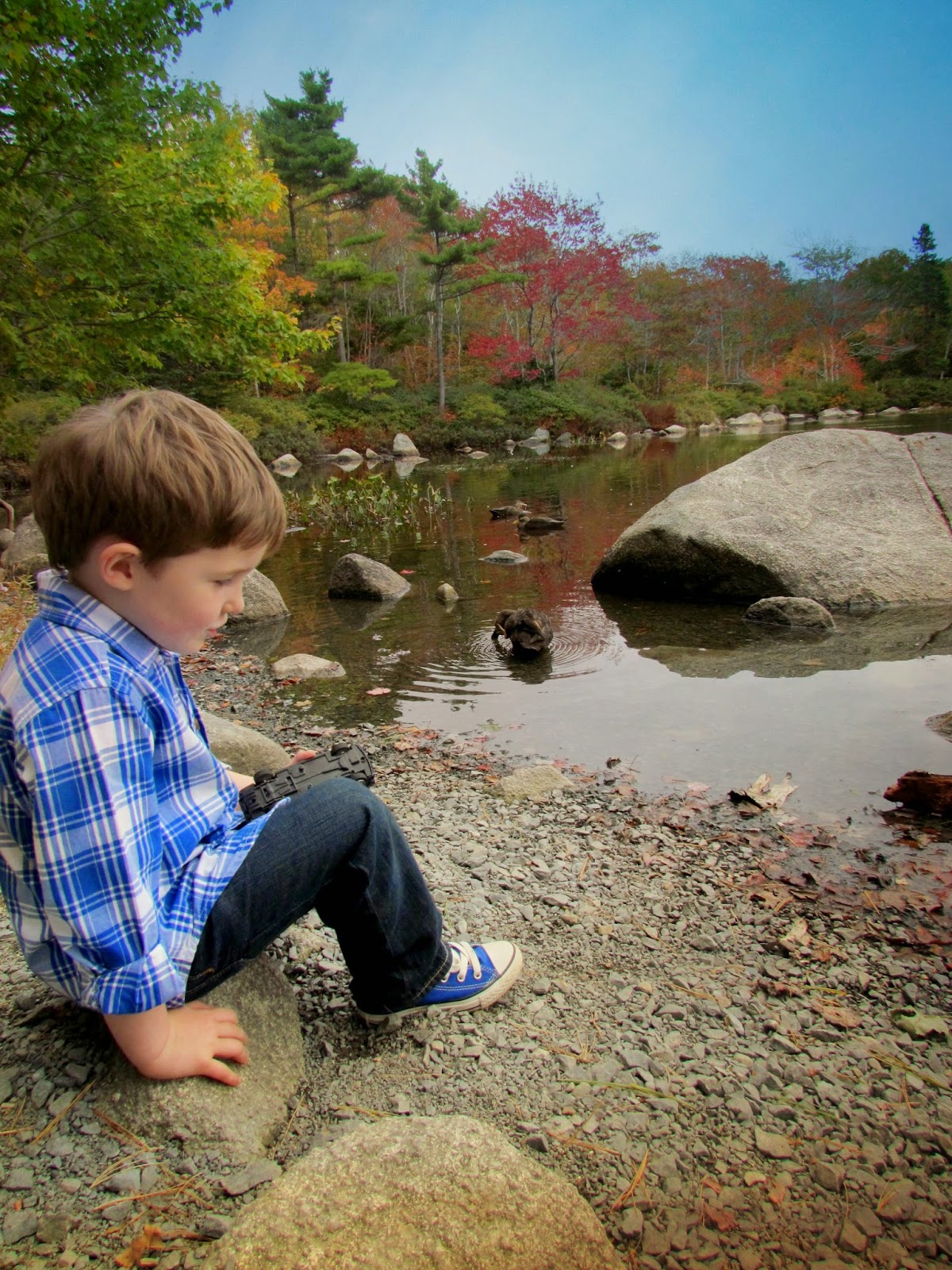 Last night, after a great walk and play date with new friends and after I had finished writing the first blog post I've written in weeks, F and I curled up together with a soft blanket well past our bedtime to chat. The nights of just F and I are on hold for a while, you see, as Little is coming to stay with us once again.

F suddenly sat up, very concerned, and asked if we had remembered to put the chocolate milk back in the fridge and I couldn't help but laugh out. It was so unusual.

F is rarely concerned about issues like whether the milk is in the fridge or the light was turned off before we walked out the door. He probably couldn't care less most of the time. So, after reassuring him that the chocolate milk was, in fact, safely stored away in the refrigerator, I snuggled him a little closer and told him I loved him.

And then it hit me: I tell him all the time how smart he is. I tell him I love him. I tell F all kinds of nice things, but I never back it up - which is pretty silly, because there are millions upon millions of reasons why I love him, why he's smart and how he's a great guy. So I started telling him.

And it turned into a little game.

"I love you because you are thoughtful and funny. I like the way you think about things and ask questions so you can learn. That's why I think you're so smart."

"Mama, I love you because you do fun things with me and take care of me. And I like that you play with me a lot and we go for walks and you buy me toys all the time!"

I got a little teary-eyed hearing F say some of the things he said, and it made me realize how grown up my little boy has become. In a lot of ways, he's much older than four - he regularly helps me get dinner ready (as in, he MAKES the salad) and we have grown up conversations more often than not. It was the perfect end to a day that had gotten off to a poor start.

And the next time he's acting his own age, throwing a toy at me or trying to pull the cat by the tail, I'll savour that moment and try to wrestle him into the pants he doesn't want to put on, just the same.

Posted by Unknown at 6:24 am No comments: Links to this post

she wrote this, too